For some reason I always thought Poland was in the cold North of Europe. This prejudice was strengthened when I found out about the weeks or months of -20C in winter. In fact, I was surprised to discover our new smallholding is just over 7km South of where we live now in Wakefield, W Yorks - and 1645km East! 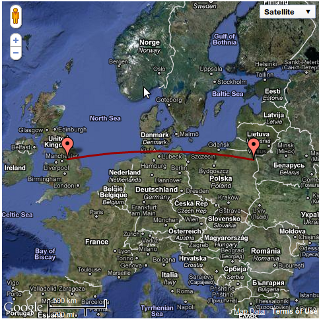 As you can see from this picture, all of Scotland is more Northerly than the most Northern bit of Poland, and the South of Poland is more on a level with Brittany...

Luckily even in the cold winter the sun often shines, and in the summer the continental climate should mean we'll be baking nicely - in fact traditionally most families had outdoor 'summer kitchens' to avoid the heat of cooking warming their houses too much.


Here is a clip from the Google satellite image of the plot itself: 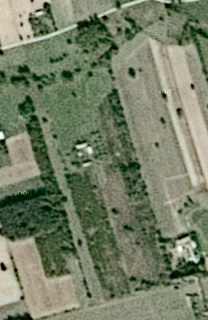 Our house and buildings are in the centre.

Our Eastern and Southern boundaries are easy to spot - the treelines.

Our Western boundary is closer to the buildings - it goes to just before the narrow strip of cultivated land.

The Northern boundary is less distinct and less straight, but it's roughly marked by the big tree or clump of trees just about due north of the buildings. There's a 'wet patch' in amongst these trees to the North, which was a small stream when we were there in April, although probably dry in the summer.

500m West is the start of a big forest (not visible in this image), 1.5km wide at this point and stretching down 24km South (and then linking in to other bigger forests...). On my first walk into the forest I met some Elk, which was an amazing experience!
Posted by Unknown at 21:05

Email ThisBlogThis!Share to TwitterShare to FacebookShare to Pinterest
Labels: Poland, Where